The Dangers of Mercury 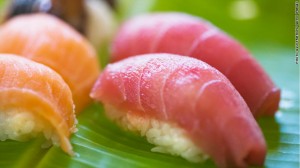 I can’t tell you how upset I was to find out my dentist had been putting a known toxin in to my mouth. What?!?! Since I was 4 years old, my poor little body had been intentionally exposed to neuro-toxin. How could he? And all those vaccines I got. How could my pediatrician have done such a thing? What happened to the Hippocratic oath of “Do no harm?”

I first learned about the dangers of mercury and how we can be exposed to it my first year of college. I was grateful that I had already given up eating seafood, so that wasn’t a concern.

Finding all of this out, I got to thinking, “How much mercury HAVE I been exposed to?” I thought I was living a pretty healthy life- organic vegetarian, using green beauty products. (And cheap beer can be vegetarian. Right?) But maybe I was wrong.

I didn’t have any symptoms of mercury poisoning, but I still had my blood tested in grad school for mercury. The levels were high. I immediately had all my silver fillings taken out and still refuse any vaccines. I did a series of liver cleanses to flush out the mercury and any other heavy metals in my system. I now have a clean bill of health. I do a liver cleanse at least once a year to keep healthy.

Luckily, our bodies have the ability to remove this heavy metal through nutritional and herbal support. I already had a diet high in antioxidants, which improves the liver’s function to rid the body of all toxins, including heavy metals. I added a few more healing modalities that support the detoxification process: acupuncture, massage, saunas, a juice fast, and fiber supplements.

Side Effects Of Mercury Poisoning

The presence of mercury is considered toxic at any level, but children are most vulnerable due to their fast growth rates and low body mass.

High concentrations of mercury can result in:

Unfortunately, there are very high rates of mercury poisoning in several industries, especially among munitions workers, laboratory technicians, farm workers, and coal burning plant workers.
Apart from exposure to industrial waste and pollution, you might be at risk for mercury poisoning through your amalgam (silver) fillings, eating seafood, and getting vaccines.

Silver Fillings
Dentists all over the world now refuse to use amalgam fillings, because of the direct link to their use and mercury poisoning. Sweden, Denmark, Austria, Norway have all banned mercury fillings. The World Health Organization has found that the average individual could absorb as much as 120 micrograms of mercury per day from their amalgam fillings, which is considered a toxic dose. Mother’s pass on the mercury in their fillings to the children through their breast milk.

Fish
Almost all fish are contaminated as the result of our oceans and streams being polluted by industrial waste. Fish with the highest levels of contamination include: tuna, swordfish, sea bass, oysters, marlin, halibut, pike, walleye, white croaker, largemouth bass, and shark. Pregnant women have been advised for years to avoid canned tuna due to the mercury content and the potential effects on the fetus. Now it’s best to avoid all seafood.

Vaccines
Mercury is also found in any vaccines containing thimerosal, which is a preservative found in many vaccines. It is possible to request vaccines that don’t contain this extremely toxic preservative.

Hopefully, this has you thinking about changing some of your habits. Get your blood tested. Take out those silver fillings. Don’t eat fish. Do a liver cleanse or two.

Once you’ve done a cleanse and flushed out mercury and other heavy metals from your system, it is important to limit exposure from your diet and environment. Try to avoid the following items that can contain mercury: pesticides and fungicides, certain cosmetics, medications, and hair dyes, fluorescent lights, and some solvents.